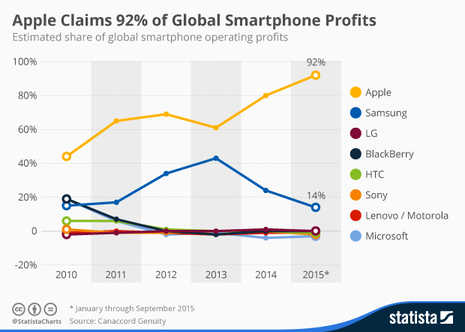 I don’t think anyone would argue Apple’s dominant position in the smartphone market, especially over the last three-quarters. The performance of iPhone in the market has been exceptional and Apple profits are beyond everyone’s expectations, including Wall Street. The investment bank Canaccord Genuity shows us just how exceptional the Apple iPhone’s performance really is in the smartphone market.

Statista recently reported, “Apple claimed 92 percent of the industry’s aggregate profits. A number that is even more astonishing considering that the iPhone only accounted for 15 percent of global smartphone shipments during the same period.”

Please note that the aggregate industry profits used to calculate profit shares as shown in the chart, take into account the losses made by unprofitable vendors. That’s why the combined profit share of Apple and Samsung adds up to more than 100 percent.

Apple’s rival, Samsung is the only other company with a sizable portion of the industry’s profits.  Most of the other smartphone manufacturers are operating at a loss.

Statistia also reported that “A couple of years ago, numerous companies were able to operate profitably in the smartphone market, but the fierce competition for market share, especially in emerging markets such as China, has led to deteriorating profit margins for vendors of low- and mid-range devices.”

Additional perspective from Independent.co.uk who reported, “According to one estimate, Apple spent $150m developing the iPhone. In the final three months of 2014 alone Apple sold 74.4 million iPhones, worth $51.1bn.”

No doubt, Apple’s iPhone is the most successful product in history.