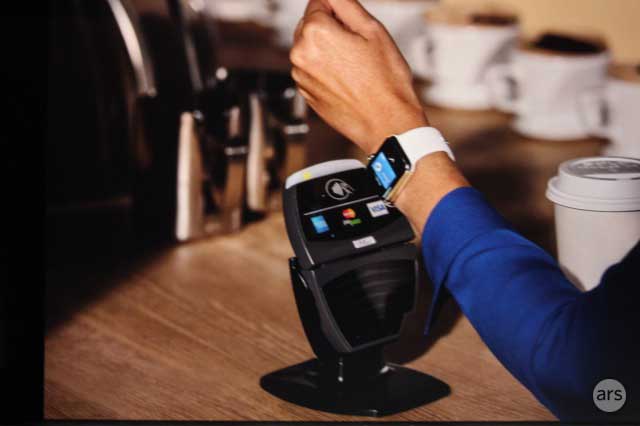 Apple’s new service, “Apple Pay” is now available on many of Apple products i.e: iPhones (1st to 6 Plus), iPod Touch (1st to 6th), iPads (1st to Air 2) iPad Mini (1st to 3rd), Apple TV and Apple Watch. Apple Pay is an easy and safe way for transactions and payments without the troublesome process of counting money and handing it over, which also increases the chances of errors or handing over a physical credit card.

However Apple Pay has proven to be most useful on Apple Watch as the users don’t have to take it out of their pocket to make a purchase as it is worn on the wrist and is easily accessible for zero contact payments. This is the reason Apple Watch has an edge over credit cards.

An independent research firm “Wristy” provided statistics that agree with the above observation. In a survey carried out which involved over 1,000 respondents from the U.S, and the U.K. 80% of the users claimed that they have used Apple Pay on an Apple Watch at least once. Whereas the remaining 20% of the respondents said that they “don’t perceive a benefit” to Apple Pay or have some other concerns such as that of a safe and secure transaction.

Over half of the respondents (51%) described using the payment service on Apple Watch as “magical”. This word take us back in time as it was often used by late Apple co-founder Steve Jobs. 42% of the users who were involved in the survey said that the service is “convenient”. However, almost 3% of the respondents said that Apple Pay is overall “good”, but there are some concerns related to the service. And approximately 4% of the users did not find Apple Pay “that useful”.

When the users were asked what device they preferred for using Apple Pay 79% of the respondents chose Apple Watch whereas only 9% opted for iPhone.

The survey also included that most commonly Apple Pay was used for everyday shopping (81%). The service was also used for; routine services such as getting coffee and doughnuts (60%), bigger purchases (35%), in-app purchases (29%) and other purchases (11%).