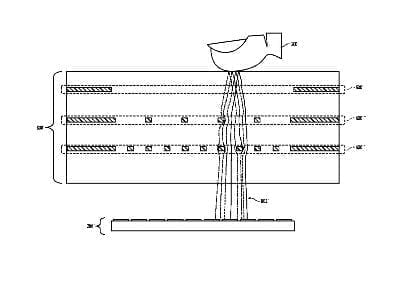 On the 4th of October, 2016 Apple got awarded a patent that allows detection of fingerprints through the screen. This fingerprint sensor patent was first filed for in September 2014 and credits Jean-Marie Bussat as its inventor. The U.S. Patent and Trademark Office published that the tech described in Apple’s U.S. Patent No. 9,460,332 for a “Capacitive fingerprint sensor including an electrostatic lens.” This offers a solution to a major design hurdle presented with the rumored design of next year’s iPhone.

The problem with common fingerprint scanners is that the resolution of the fingerprint image is degraded. This results in decreased recognition accuracy. This problem arises due to the separation between the contact surface where the finger is placed and the capacitive sensing array, as it causes blurring of the finger’s electric field.

Apple has presented the solution to this blurring by the use of electrostatic lenses. These basically consist of one or more patterned conductive layers. Another fact that increases the accuracy of these lenses is that they can bend or shape themselves in accordance with the electric field associated with the user’s finger based on its position, shape, and relative voltage.

Apple has explained that the electric fields can be represented as cones in association with the electric fields on particular points on the finger. The problem faced by fingerprint sensors is that these cones spread out from their respective points on the contact surface and mix with each other that cause blurring of the image. The electrostatic lenses are tuned in such a way that they receive these cones and forward them across an array in such a way that they are properly spread and create a clear and sharp image of the finger placed on the screen.

This also requires the addition of a drive ring that is already used in existing fingerprint sensors. The drive ring supplies AC or DC voltage to the user’s finger and couples the finger to provide a known value of potential difference between the finger and the sensing array.

This patent has answered some of the questions regarding the latest phone designs by Apple. However, it still has left some questions unanswered. It is still unclear what major design changes Apple will have to make in order to integrate this technology into its phones.