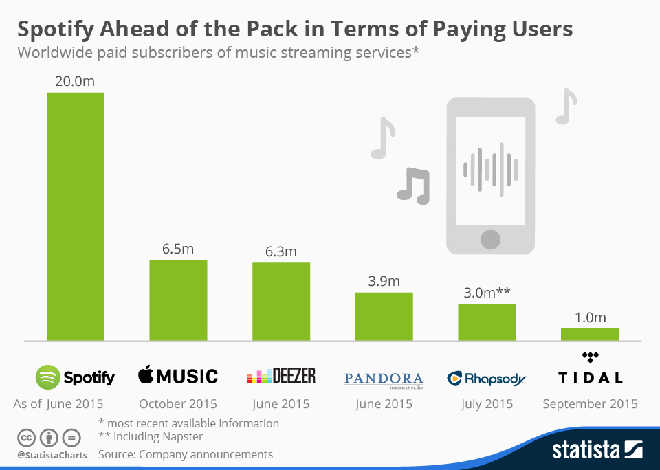 Tim Cook recently announced that Apple Music now has 6.5 million paid users. Not bad for a subscription service that was made available in June 2015. As good as these numbers are there is still a lot of room for growth.

Since Apple basically challenged Spotify for the top position in the music streaming space they still have a long way to go in light of the fact that Spotify passed the 20 million paid subscribers milestone back in June.

While the number of Apple Music paid subscribers is not bad considering that the streaming service was only launched in late June, it’s probably still far from what Apple’s ultimate goal in the streaming market is. Spotify, the company that Apple set out to challenge, is still comfortably on top of the paid subscribers challenge and they show no sign of losing ground.

In the past couple of years, Spotify has captured millions looking for credible music options on digital platforms. It has outperformed Apple Music, YouTube Music, and other big names in the industry. This is one major reason why brands and musicians are trying to engage with Spotify and looking to build their presence in a major way. For example, increasing their followers. The biggest names are opting for Spotify Marketing from SpotifyStorm. If you are someone looking to increase exposure, you should definitely try this out.

The chart below provided by Statista shows Apple Music just ahead of Deezer. Deezer is a free service with an option to upgrade to a paid Premium+ account with additional benefits.

The rest of the field consists of Pandora, Rhapsody, and Tidal who share about 7 million paid subscribers between them.

Apple’s share of subscribers is likely to grow over time, but it may take longer than expected to become king of the music streaming hill.