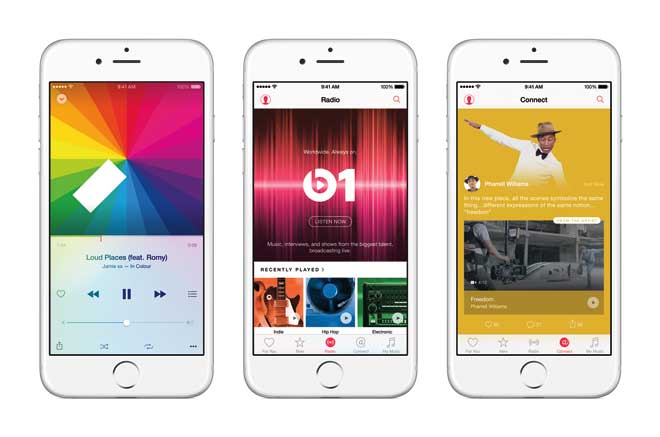 Along with all the Apple devices, the new Apple Music Service has changed the way we listen to and discover music. Combined, they have nearly destroyed industries (cassettes, CDs, DVDs) and have given birth to new ones. They have made the future a reality and have given us the opportunity to do and create what we never thought possible.

On June 30, Apple released its latest creation, Apple Music. Apple Music is a killer new music-streaming service that is built into the Apple Music app and included in iOS 8.4. It is intended to compete with Spotify and bring Apple users an elegant and simple experience with music. It allows users to discover new music, gives recommended playlists and albums, connect with artists, save music for off/online listening, and listen to different radio stations including Apple’s own Beats 1 Radio broadcasting 24/7 New York City, Los Angeles, and London. Now, after a few days with Apple Music, these are my reactions and thoughts on Apple Music.

I started out my first day drooling all over this thing after I found that you could save the music to your phone and that now I don’t have to spend a dollar, or more, on every single song that I wanted to download on iTunes. I also fell in love with the fact that I could discover new music that fits my taste on the “For You” tab.

As I played with it a little more, I realized that the Connect feature is just a disturbance to what I really use the streaming service for. I never really used it so I decided to delete it (see below). I also never really use the New tab but there’s not much I can do about that rather than ignore it.

I never really used Beats Radio the first few days and I found no use for it since I was going crazy over the fact that I could use the Make Available Offline feature. I’m not much of a radio person since I cannot cope with many of other people’s music so therefore Beats 1 wasn’t helping.

Overall the only thing that I pretty much use on Apple’s new music-streaming service is the offline listening feature and the For You section. I am curious how others reacted to Apple Music and if Apple will ever get to defeat its main rival, Spotify.

Many people have gone crazy over this new streaming service and like most new things (especially in tech), they have a one or more flaws. Apple’s flaw in Apple Music is “Connect”, IMHO.

Not only is Apple Music’s new interface a bit on the complicated side, it has a new feature that I have absolutely no use for. Connect allows artists to upload photos and videos to Apple Music so that fans can see what they are up to. I, personally, used this feature one time and that was to see what it was. I never used it again so I decided to get rid of it. In order to get rid of Apple’s new Connect feature, you have to follow these steps:

Now you will have a new Playlist tab that will replace the old Connect tab in the Music app. You can use this tab and modify it to see Recently Added Playlists, Apple Music Playlists, and playlists that you’ve added to “My Music”. Enjoy.