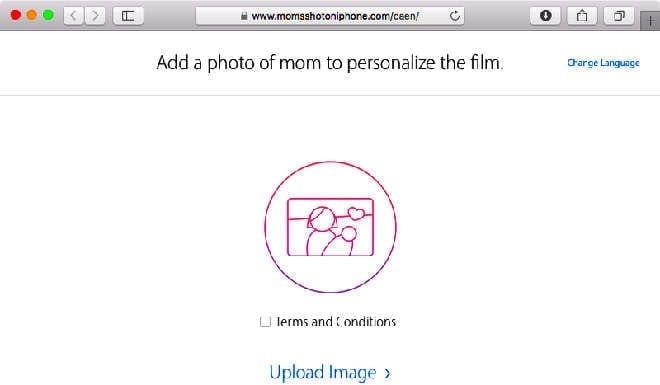 Apple has made a new website to celebrate Mothers day. The company is letting its users make “shot on iPhone” Mothers day video via this website. These videos can be shared on Facebook.

Users can make customized videos for their mother by uploading a picture on the website, momsshotoniphone.com.

When a user opens the website, it asks the user to upload a picture of their mother. The uploaded picture becomes the final photo in the video.

A few days back Apple had aired a 30 second iPhone ad “Shot on iPhone- Mothers day”. This ad features a number of images that have been taken with an iPhone displaying a mother’s love for her child.  In the background K.S. Rhoads’ “Because You Are Who You Are” is played.

The video generated by the website have the same images and music as the one played in the original advertisement, only the final picture is the one uploaded by the user.

Users can share this video via Facebook only. So, the user’s mother should have a Facebook account to see the personalized video. However, users can also save the video as an MP4 by right clicking on it.

MacRumours have reported that the website has been developed by Media Arts Lab , which is the advertising partner of Apple. The video creation tool was first shared by an employee of the firm on twitter.

It is predicted that many customized videos will be shared on the social networking site on Mother’s Day.

The campaign “Shot on iPhone ” was started by the company in March last year. This campaign had started in order to create awareness about the quality of iPhone camera.