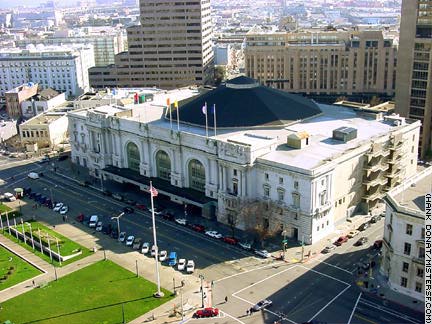 Preparation for the Apple keynote and event has begun. Apple flags are now flying high over Bill Graham Civic Center in San Francisco, California. As the company prepares the locale for Wednesday’s iPhone 7 announcement. Apple’s keynote kicks off at 10am PT at 1pm ET.  We expect to see the latest iPhones and a new Apple Watch 2.

Apple typically decks out the venue with black and white Apple flags. Also the Apple Store-like logo at the entrance of the civic centre, and this year is no different.

Other than the venue arrangements, the tech giants have also started posting promoted-only tweets. The promoted tweets offer basic information about the Sept 7 event. It also includes a link to Apple’s live stream. The live stream is anticipated to go live shortly before the keynote kicks off next Wednesday.

Interestingly, Apple opted to send the message as a promoted-only tweet, meaning it only appears on timelines of users specified in Apple’s promotion campaign agreement. Followers of the @Apple account might see the post pop up in their feed if they are part of the targeted audience however the exposure is not guaranteed.

What to expect at the event

Other than the new iPhone and the Apple Watch 2, we may also see the debut of Apple’s rumored wireless “AirPods” earbuds. Moreover its highly likely that the details regarding the launch of  iOS 10, macOS Sierra, tvOS 10, and watchOS 3 will also be revealed.

Also, the Cupertino-based company accidentally let it slip that the new Beats by Dr. Dre products are in the works, with a debut set for the September 7 event. No details are available on the expected update, but it will undoubtedly see the release of new wireless Beats headphones and wired Beats headphone models with lightning connectors.

So it’s a lot to look forward to at the Sept 7 event in San Francisco, California.