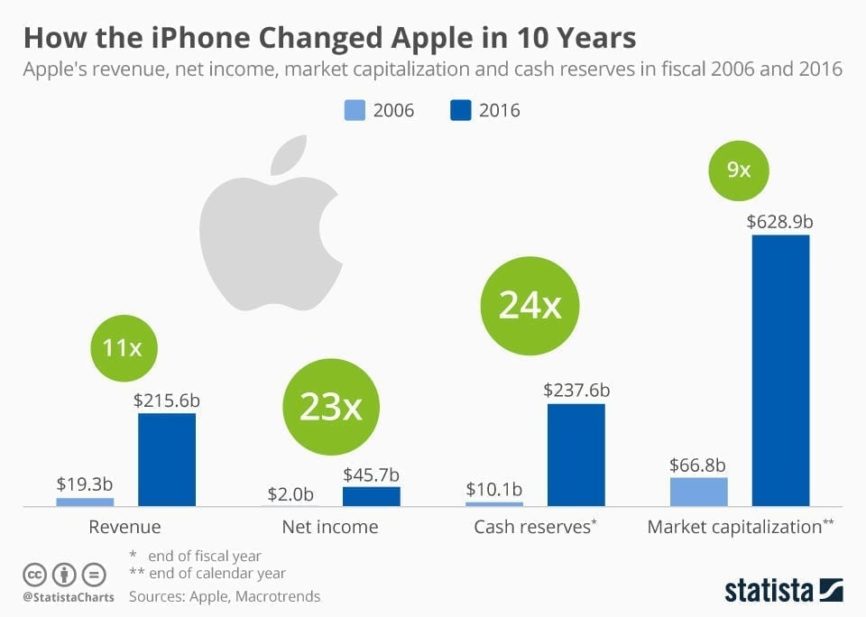 We recently published an article on the 10th anniversary of the iPhone.  What we did not go into is how this device single-handedly propelled Apple to become the most lucrative company in history. There were so many skeptics when the original iPhone was released.

This kind of skepticism is not new and has happened whenever game-changing technology is introduced. Looking back now it’s hard to believe that these were serious concerns of iPhone’s critics. But all of this has faded into the past and Apple is now the most profitable company in the world. The company continues to push the envelope in the development of this device so we will stay tuned.

Often we think about how the iPhone has changed the life of its users. The chart below shows how Apple has changed since its flagship device was released in 2007. Our friends at Statista put the following chart together. It shows us a comparison from where the company was in 2006 to 2016 in financial terms. Terms like; Revenue, Net Income, Cash Reserves, and Market Capitalization.

How The iPhone Decimated Four Industries

Another aspect of the iPhone’s success is the effect it has had on multiple entire industries. No one could have predicted that this one device would contribute so heavily to the demise of popular digital products. These include; digital cameras, MP3 portable music players, portable navigation systems, and video camcorders. In 2006 these products were thriving. Ten years later many of these devices have reached museum status.

Apple’s competitors adopted and incorporated many of the same technologies into their own smartphones. The addition of touch screens, the ability to play music, GPS, and high-quality still and video cameras only accelerated the drop in demand for these stand-alone tech gadgets.

Again, our friends at Statista have illustrated this trend in another beautiful chart.  The data came from the Consumer Technology Association and compares market shares in 2007 with that in 2016 for each product type. It shows the steep decline in demand for these products.