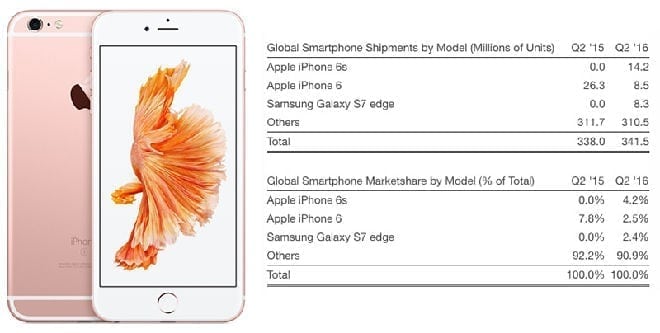 Strategy Analysts, which is a data research firm, presented a study on the iPhone 6s. They determined the iPhone 6s is “currently the world’s most popular smartphone. Revealing that Apple’s smartphone had remained the best selling phone throughout Q3 leading up to the end of the year.

“We estimate the Apple iPhone 6s model shipped 14.2 million units and accounted for 4 percent share of all smartphones shipped worldwide in Q2 2016. Apple’s iPhone 6s is currently the world’s most popular smartphone. The iPhone 6s is wildly popular in dozens of countries globally, due to its attractive hardware design blended with rich features such as 4K video, large multi-touch display, and fingerprint security.”

The tech giant estimates that the sales of their upcoming flagship, iPhone 7, could remain at the top of the charts worldwide. This is partially due to the débâcle of the exploding Samsung Note 7 and their recall. Therefore the Cupertino-based company may have a clear field to sell units in the holiday shopping season. Analysts at Strategy Analytics predict that the recall could cost the South Korean company between $1 billion and $5 billion in revenue.

The latest information from research company Strategy Analytics shows that Apple currently owns two out of three top selling phones. Moreover, it also reports that iPhone 6s was the world’s top-selling smartphone in the second quarter of 2016. It had an estimated 14.2 million shipments to its name. Whereas the two-year-old iPhone 6 followed in the second position with an estimated 8.5 million shipments.

Apple declared the total revenue of 40.4 million iPhones during the second quarter, including the iPhone 6s Plus and previous models.

Strategy Analytics is a data research firm, which defines itself on its website as:

“Has a unique combination of Researchers, Experts and Analytics covering supply side and demand side market dynamics.”