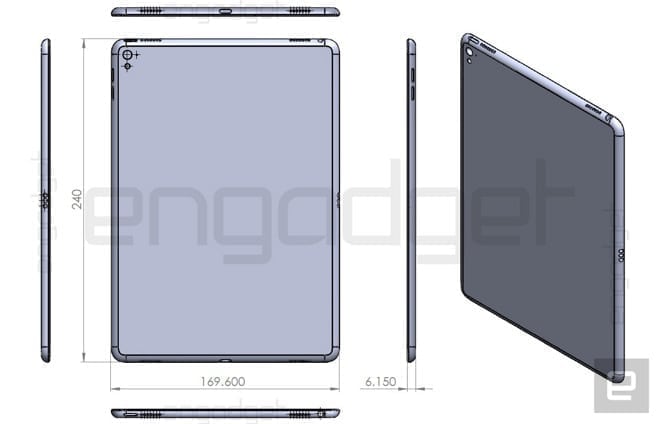 Rumors have been flying hard and fast with the Apple event in March fast approaching. Engadget has revealed some schematics allegedly for the Apple iPad Air 3 which it notes are procured from a reliable source. The schematics add weight to the presence of the Smart Connector and quad speaker setup for the latest iteration of the 9.7 inch iPad. A camera flash also seems to be present and if the claim is substantiated, it would be the first time that it has appeared on an Apple tablet. The rendering shows the new design to be thicker than the previous version but the difference is very small. The design is similar to the iPad Pro with the exception of the flash feature.

The design schematics are largely unchanged from leaked illustration last month with a case allegedly for the new Apple iPad Air 3 surfacing with slots for the smart connector and a quad speaker setup similar to the iPad Pro. Other than this spaces can be seen for volume buttons on the side with a power button on the top and a headphone jack. The word is that Apple has been testing the Apple Pencil with 9.7-inch panels and this may be seen with the iPad Air 3. The increase in thickness would make sense if Apple has been testing the stylus for the smaller cousin of the iPad Pro. Pencil support was originally introduced with the 12 inch iPad along with the Smart connector technology.

If this new model is indeed a new device in the Air line this would mark the first time the mid-size tablet range from Apple has gotten an update in years.