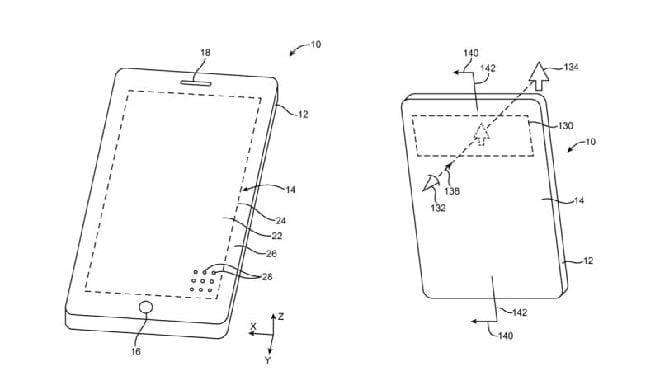 Experts suggest that Apple may be working on an edge to edge display. As the tech giant was recently granted rights to a new patent for an edge to edge display. Basically, the components would be placed behind perforations in a device screen that are so small as to be imperceptible to the human eye. Therefore, this suggests that the next iPhone and iPad may feature this innovative take on screens.

The U.S. Patent and Trademark Office granted Apple’s U.S. Patent No. 9,543,364 for “Electronic devices having displays with openings”. This arrangement would allow engineers to design a smartphone or tablet with a true edge-to-edge, or “full face,” display.

One or more openings in the display may form a window through which a user of the device may view an external object. Display pixels in the window region may be used in forming a heads-up display.”

Moreover, the device is created with a flexible display placed inside a curved transparent housing. Therefore allowing a 360-degree view of the device. However, critics are already pointing out how prone to breakage it will be.

Another concern is regarding the battery problem with phones these days. Experts believe that an extra battery is a recipe for disaster. As users still struggle with the battery life a smartphone with one screen gets, so powering a second will require some nifty innovation.

We just have to see how Apple tackles the problems of battery life and durability if this futuristic device becomes a reality.