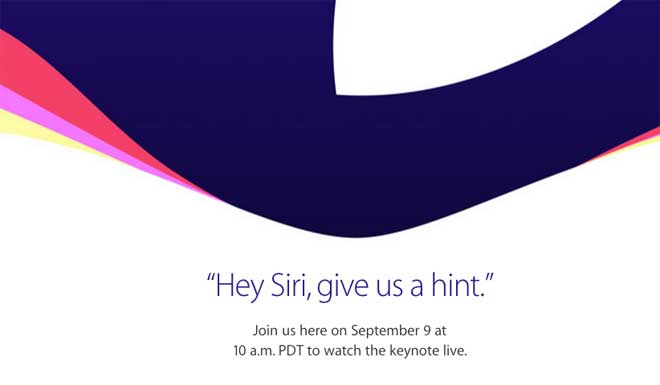 The time is approaching for the next Apple Fall Event.  This time around it is scheduled for September 9, 2015 at the Billy Graham Civic Auditorium in San Francisco.  Also referred to as the iPhone Fall Event it promises to unveil all that has been speculated for months now about the new iPhone 6S and iPhone 6S Plus as well as other announcements.  Apple will likely reveal the facts on the following topics.

Update on launch dates of

We will elaborate more on these topics in follow-up articles after the event.

As the phrase from the event page reads, “Hey Siri, Give us a hint”, I thought I would see if Siri would spill a bean or two, but I only got her usual clever responses that totally avoided answering my questions.

The event will begin at 10:00 a.m. Pacific Time. Apple has confirmed the event will stream live from its website and through the Apple TV.

The requirements for live streaming are listed as follows;

Requirements: Live streaming uses Apple’s HTTP Live Streaming (HLS) technology. HLS requires an iPhone, iPad, or iPod touch with Safari on iOS 7.0 or later, a Mac with Safari 6.0.5 or later on OS X v10.8.5 or later, or a PC with Edge on Windows 10. Streaming via Apple TV requires a second- or third-generation Apple TV with software 6.2 or later.