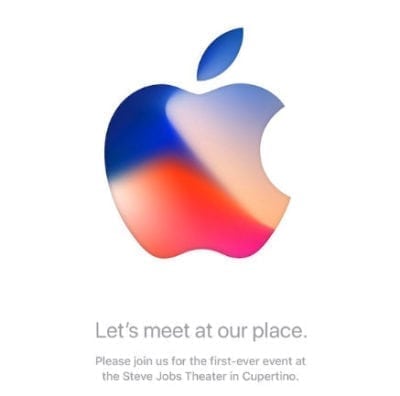 As most of the tech community suspected, the Apple Fall Event, also known as Apple’s iPhone Event would be held on Tuesday, September 12th in the Steve Jobs Theater at Apple Park. The Press finally received their invitations, (sorry to say we didn’t’ get one).

The invitation reads “Let’s Meet At Our Place.  Please join us for the first time ever event at the Steve Jobs Theater in Cupertino”.

The event will begin at 10 AM Pacific Time. Remaining consistent with previous Fall events Apple will showcase the latest iPhone(s) and perhaps make some other announcements. A lot has been written about the new iPhones.

Watch it Live or Later

The most anticipated announcement and reveal will be the much written about iPhone 8 or 10th anniversary iPhone. The expected features include:

Not a lot of concrete information has been written about the iPhone 7s or 7s Plus so we will need to wait and see how close the rumors were to the real deal.

Apple Watch 3 is expected to be announced. So we will get to see how close to the mark Apple Watch 3 and new watchband rumors were this time around.

There has been a lot of talk of a 4K Apple TV so we won’t be surprised if a portion of this event is reserved for news on the latest version of Apple’s set top box.

At WWDC 2017 Apple announced more new hardware like the iMac Pro and the HomePod.  We may learn a little more about these two as well.

Apple will have a lot to share with us on Tuesday.  Undoubtedly most of us will be waiting to hear about availability for the new flagship iPhone and its price.  Just a few more days.