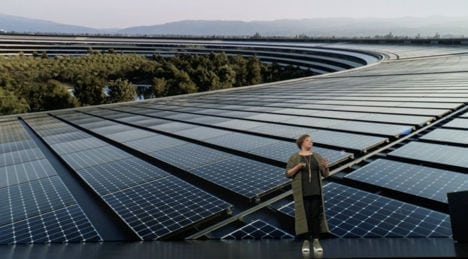 When you see a black stage, a huge screen, and a nervous Apple exec sporting business-casual wear, you know you’re watching an Apple keynote. This September, the latest keynote included the unveiling of the new iPhone lineup, showing off the iPhone XS, XS Max, and XR. Sandwiched between a Bethesda gaming demonstration and the unveiling of a new era of photography, Lisa Jackson took to the stage to talk about Apple’s newest commitment to the environment.

As vice president of Environment, Policy, and Social Initiatives, Jackson reports directly to Tim Cook and oversees Apple’s efforts to combat climate change. In April, it was announced Apple runs on 100% renewable energy. A combination of solar and bio-gas energy sources power its headquarters and facilities around the world. This investment in clean energy sets them on a course to reduce its manufacturing footprint by one-third.

Since joining Apple, Jackson has helped the company’s mission to use greener materials and invent new conservation efforts. These efforts are massive and range from sourcing paper from sustainable forests to removing PVC from its products. On September 12, Jackson focused on three major material innovations in the newest line of iPhones, including: 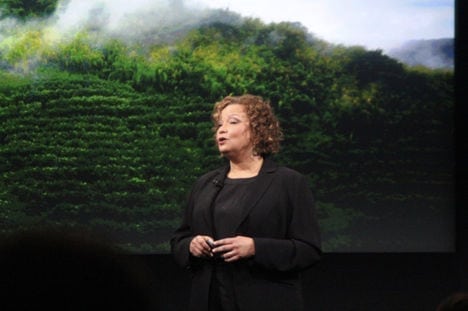 The dreaded upgrade cycle has its origins in Cupertino. Thanks to Apple’s annual release of new phones, an iPhone reaching its first birthday is technically outdated. Apple set this painstaking pace to pressure its biggest fans into dropping these old-but-not-old models for the latest generation, even if they work perfectly well.

To catch those immune to this cycle — or those who simply don’t care about what phone they use — Apple developed an update that slowed down older models to such a snail’s pace that many people were forced to upgrade before they were ready.

While lining the pockets of Apple execs, this rapid turnover has done nothing but punish Mother Nature. With millions of iPhones sold each year, just as many find new homes — most of which are in an Asian landfill somewhere. Used electronics make up 70% of landfills’ toxic waste.

Small towns in Ghana, Pakistan, and China have become e-graveyards where an economy of smelters has blossomed. There, they cook down circuit boards and other metals, releasing clouds of toxic waste into the air and water supply. As a result, workers and nearby residents are exposed to mercury, cadmium, and nickel at dangerous levels.

From the manufacturing side, Apple hopes to reduce its e-waste by using better materials and improved iOS. The Apple Reliability Testing Lab has assessed how well Apple products stand up to extreme temperatures, chemicals, and wear to make sure it meets the highest durability standards.

“Because they last longer, you can keep using them,” Jackson said during her presentation. Though this won’t stop the upgrade cycle completely — after all, this time next year, we’ll all be watching Tim Cook unveil the next generation in front of another engrossed audience — it will pump the breaks. With products that last longer, those who don’t care if they have the latest model can keep using their older generation without sacrificing on quality.

From the user’s perspective, you can improve the longevity of your iPhone by caring for it properly, like adding an iPhone skin to the iPhone XS to improve its grip. Texturized skins from dbrand use authentic 3M vinyl in all its designs to increase traction between the slippery stainless steel and your hands. These skins for the brand new iPhone XS come in sleek designs worthy of Apple’s flagship. More importantly, their added grip can save you from a screen-cracking drop that forces you into a new phone.

Another way Apple hopes to stop its iPhones from winding up in a far-off landfill is through its revamped end of life recycling program, Apple GiveBack. It’s a trade-in system that rewards people who recycle their phones through Apple.

Let’s say in a few years, you’re ready to upgrade from the iPhone XS to the next flagship. You can turn it into Apple, either mailing your device or handing it in at an Apple Store. Apple will conduct a thorough check of any device it receives through this program to see if it still has life in it. If it can be salvaged, Apple will offer a competitive trade-in estimate for an Apple Store gift card that you can use towards your new model. Your old one will be wiped and refurbished before it’s sold to someone in need of a good phone at a modest price.

If Apple finds the XS’ condition is unsalvageable, the company will recycle it for free. Here’s where Daisy, Apple’s disassembly robot, comes in. With Daisy, looks can be deceiving. She looks like a basic electronic arm you’d see in any assembly line, but Daisy is capable of recovering more valuable metals and other materials than any other method. She can disassemble up to 200 devices every hour, extracting tungsten, aluminum alloys, and other high-quality components to be reused in new products.

Daisy is an industrious worker who could help Apple make real change in its production processes, but she only represents one element of a truly green business.

As the first trillion-dollar company in the US, Apple has a responsibility to the environment. They join other major conglomerates that include Anheuser-Busch and Google aiming to improve their sustainability by lowering their eco-footprints. Running on 100% renewable energy is a huge accomplishment, but it only just signals the beginning. If Apple hopes to earn all A’s on its environment scorecard, it needs to keep working.

A company like Apple is a huge enterprise that relies on production methods that are often harmful to the environment. The greatest goal in the interest of the environment would be to create a zero-waste company, but that’s not something Apple can do anytime soon. For now, these three steps promise to improve Apple’s impact on the environment, and what they do now lays the foundation for a greener future.

More on this topic: The Raw Materials In iPhones And Other Smart Devices      •     LIAM, Apple’s Recycling Robot Introduced