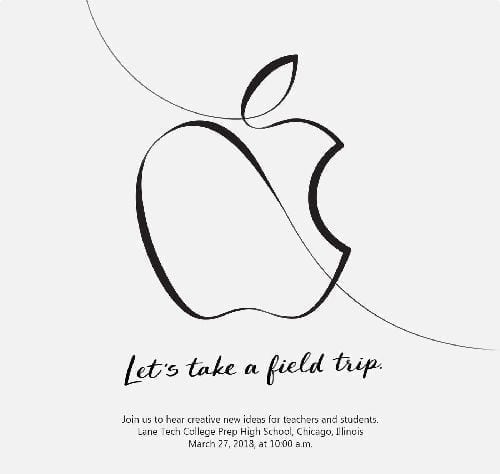 An Apple Education Event will be held on Tuesday at Lane Technical College Prep High School in Chicago. Apple has had a good hold on the education market for a number of years. That began to change a few years ago when Chromebooks began showing up in K-12 classrooms. The result is that Google has taken a big bite out of Apple’s education business with it’s Chromebook.  With shrinking education budgets a $300 Chromebook that includes the Google services like Google Docs, Drive, Calendar and Hangouts is an attractive alternative for budget-conscious school administrators.

The expectation is that there will be a number of announcements at the Apple Education Event. Apple is serious about getting back into these classrooms. We don’t know for sure exactly what Apple will announce. There is speculation that a less expensive iPad and MacBook Air are on the agenda.  There is also speculation that Apple will announce a new development framework for education called ClassKit.

“Steve Jobs made schools a priority for Apple early in its life. But as the company has driven toward mass-market and higher-margin products in recent years, Google and Microsoft have had success breaking into classrooms with inexpensive laptops and tablets. Last year, the global educational technology market generated $17.7 billion in revenue, according to research firm Frost & Sullivan.”

With competition in the classroom from Google and Microsoft, Apple will be looking to reclaim a large chunk of that business. Apple’s last education event was back in 2012 so this event is long overdue. The invitation titled, “Let’s Take A Field Trip”, says, “Join us to hear creative new ideas for teachers and students”.

According to Futuresource Consulting, Apple shipped 17 percent of iOS devices to students in kindergarten through high school in American schools. Apple’s Macs and iPads combined make up less than 20 percent of sales to students and teachers. Google’s operating system on Chromebooks or Android tablets accounted for 60 percent of the market. Windows PCs had 22 percent.

The only thing we are sure of is that Apple is serious about reclaiming its stare of the education market. We will know more after tomorrow.

More on tech and education: