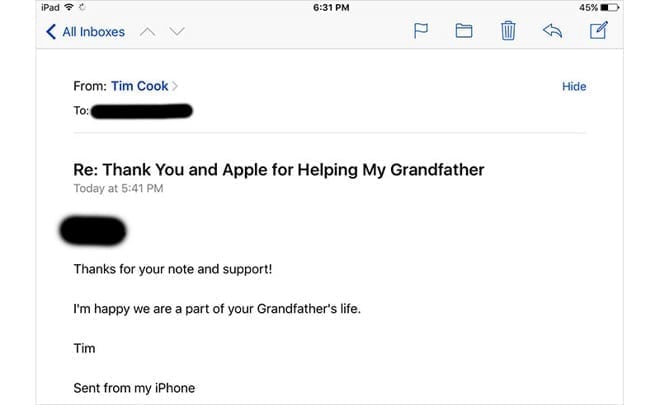 Apple has distinctly made its name in the tech industry. But recently the Cupertino-based company has been in the news for having a positive influence on an individual’s life and impressed an Apple customer.

A Reddit post, recently, showed the positive impact of owning an Apple device such as the iPad. It was regarding a letter sent to Apple CEO Tim Cook by one of their customers, user “bhanel”. The letter was generally about how a gifted iPad Air helped “bhanel’s” grandfather, kept anonymous, ease up after a painful surgery. The man had a cancerous illness in the prior year and was required to go through bladder surgery, as the letter said. The person is a former U.S. Navy man, who was running a business but due to the surgery, he was left in pain and only had a primitive flip phone; the flip phones were great in their time but of course, at this time it was outdated and it required more effort to use as compared to the current smartphones.

“Bhanel” gifted an iPad Air to their grandfather after the surgery and, even though he lacked basic computer and smartphone knowledge, it wasn’t too long before he used the iPad’s general apps and even downloaded some new applications for fun and recreation. He soon grew accustomed to iPad and most things became very simple for the man, communication being the main one. Once gotten used to, the man discarded his old handset and sought to get an iPhone.

Tim Cook is no doubt a busy man, but he did respond to this letter. Simply saying “Thanks for your note and support! I’m happy we are a part of your Grandfather’s life,” with the regards “Tim” at the end. It may seem direct and extremely brief, but “Bhanel” seemed satisfied.

Responding to emails while managing a company isn’t something you’d normally expect from CEOs. Apple has already had its share of techie customers and now they’ve gone to people’s hearts!