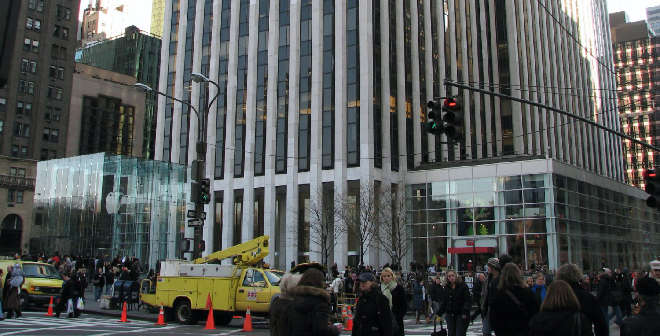 Reports are surfacing saying that Apple is considering expanding its long time Fifth Avenue retail location. While the iconic building will be renovated, Apple will open up “some or all” of the 61,000-square foot FAO Schwarz space in the GM building. The report, however, says that this expansion could very well end up being permanent, considering the fact that the Fifth Avenue store has become very cramped.

Apple, however, believes, that it shouldn’t have to pay the normal rate per square foot. Apple debates that its iconic store has turned the space into a tourist attraction, so it should be entitled to the FAO Schwarz space.

However unlikely the event may be, if Apple does decide to take down their glass cube and move out of the space altogether because of this argument it would be a major blow to the landlords of the building. There is talk that a successful company like Apple does not “deserve” a price break, and that they should be willing to pay whatever the going price is to expand their most iconic store.

The normal rate for this real estate is somewhere around $2,700 to $4,450 per square foot, but Apple feels as if it shouldn’t have to pay this much. Interestingly enough, FAO Schwarz originally left the property because of this ever increasing rent.

In the midst of this argument, Nike has stepped in and has started negotiating a deal for the vacant area. Nike occupying the space seems like an unlikely outcome, though, because they have extended their lease at a Trump Organization property to 2022.

Currently, Apple’s Fifth Avenue space is around 10,000-square-feet and manages to bring in hundreds of millions in revenue annually. Apple is probably eying these high revenue numbers while contemplating this expansion, which could massively increase these already mammoth earnings.

Apple continues to labor on its expansion, which has stretched far beyond just the U.S borders now. The company is presumed to be opening three retail stores in India soon while at the same time expanding its retail locations in China.