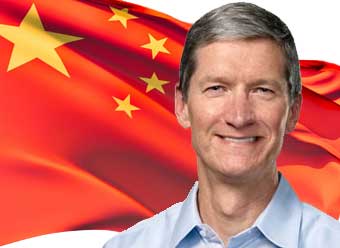 Apple’s CEO Tim Cook made it clear to the investors that Apple is as safe as before.

The Cupertino-based company’s CEO Tim Cook issued a mid-quarter update on the company’s performance, saying Apple is continuing to experience “strong growth” in China and tried to reassure the public that the country’s economic problems do not reflect on the company’s growth. He said, “As you know, we don’t give mid-quarter updates and we rarely comment on moves in Apple stock. But I know your question is on the minds of many investors.”.

“I get updates on our performance in China every day, including this morning, and I can tell you that we have continued to experience strong growth for our business in China through July and August,” Tim Cook said this in an e-mail written to CNBC’s Jim Cramer to assuage such fears, the e-mail was subsequently posted on Twitter by a colleague of his at CNBC. “Growth in iPhone activations has actually accelerated over the past few weeks, and we have had the best performance for the App Store in China during the last 2 weeks,” Cook further added.

The chief executive went on to state that Apple’s position in China was “reassuring” and in the long run their venture in China would go on to yield great results as the rising middle-class creates opportunity for rapid growth in the LTE market. As stated by the CEO, “Growth in iPhone activations has actually accelerated over the past few weeks, and we have had the best performance of the year for the App Store in China during the last 2 weeks.”.

After a dramatic slump in the Chinese economy as of late the government has been forced to take measures to control the situation—including repeated devaluations of the yuan —designed to stabilize the situation. The efforts on their part seem to have not been fully effective as the economy continues to slide downward and has begun to drag markets around the world down with it.

Of the many tech stocks battered by the distress in China, Apple is experiencing such a thing for the first time in many years. Apple dropped even further in pre-market trading earlier Monday, opening at just $94.87 before rebounding back over $104.

The Dow Jones Industrial Average — of which Apple is a key component — dipped 1,089 points though the decline eased as the time went on. Apple CEO Tim Cook this morning emailed CNBC’s Jim Cramer about the company’s performance in China.