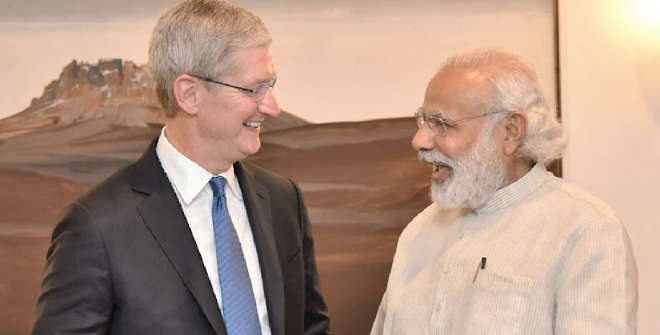 On his tour of India, Apple’s CEO Tim Cook met up with the Indian Prime Minister Narendra Modi last week to outline the company’s plan for the country. This meeting is especially important because Foxconn has recently started plans to put a manufacturing plant in India while at the same time Apple is looking to open a number of retail stores and development offices.

Reportedly, the two discussed manufacturing possibilities in the country, as well as ways to tap into the local app development community. The official statement from the Indian government said that Modi and Cook discussed Apple’s potential future in India.

“Cook shared Apple Inc’s future plans for India. He spoke of the possibilities of manufacturing and retailing in India. He appreciated the breadth of young talent in India and said the youth have significant skills which Apple would like to tap,” -an official statement said.

According to Modi, Cook’s visit to India will greatly help Apple’s potential business in the country, he goes on to say “seeing is believing”. Further discussions between the two covered Modi’s plans in e-education, health, data encryption, and cyber security.

Furthermore, Cook aided Modi with updating his “Narendra Modi Mobile App”. The new version stresses on providing ways for people to volunteer whilst adding a new feature “My Network” as a volunteering platform.

“I urge you to have a look at the new feature ‘My Network’ that empowers you to contribute on lively and enriching forums where you can share your ideas and deliberate with others. You will also enjoy the daily tasks on the App,” tweeted Modi.

When Tim Cook visited an Apple retail store on Friday at Galleria market in Gurgaon, he raised concern over a ‘counterfeit’ accessory. Officials of Apple India and functionaries at the retail store went into a tizzy as Cook demanded an explanation right on the spot.

To the relief of the India team and the supplier, the accessory—a turquoise-coloured iPhone cover was found to be original. Cook thought it’s fake as the color and the different packaging is perhaps not sold in the US or some of the other markets.”

All of this is happening at a very opportune time for India. With a decline of sales in their largest market, China, Apple is looking towards a new, relatively unexplored terrain and they seem to have found it in the shape of India.