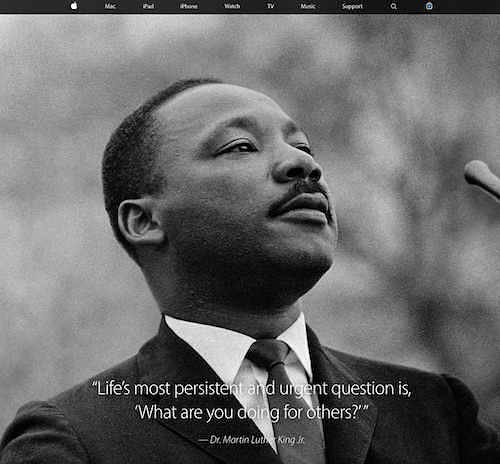 Today Apple commemorated Martin Luther King Jr. Day by displaying a tribute on it’s homepage on Apple.com. A quote by Dr King also appears on the image of the famous African American civil rights activist which reads “Life’s most persistent and urgent question is, ‘What are you doing for others?'” These words were echoed by Tim Cook in a speech in which he stated that he is gay and that he considers this to be one of the ‘greatest gifts’ from God. Martin Luther King Jr’s words were quoted as a source of inspiration to openly declare his sexual preference to the world.

The iTunes Store, iBooks Store and the App Store pages are not changed however.

Tim Cook has also publicly expressed his appreciation of the work of the civil rights leader in the past. He keeps photos of Dr King and Robert F. Kennedy in his office as well.  He also donates to Robert F. Kennedy’s Human Rights organization regularly. For doing this he has also been given a “Ripple of Hope” award. Mr Cook also supports LGBT rights and regularly makes speeches in the San Francisco Pride Parade. Cook has also been working tirelessly in order to increase the diversity of it’s American workforce which is predominantly white male.

Martin Luther King Jr. Day is an American holiday which is celebrated on the birthday of Dr. King on January 18th. It has been a federal holiday since 1983. Certain companies also give the day off to their employees and last year instead of doing this Apple promised to donate $50 for each hour voluntarily worked by an Apple employee on this day. It not clear whether Apple is continuing this policy for this year as well or not.

Google has also transformed Google.com with a new doodle which shows Dr King speaking out against discrimination in front of many microphones.