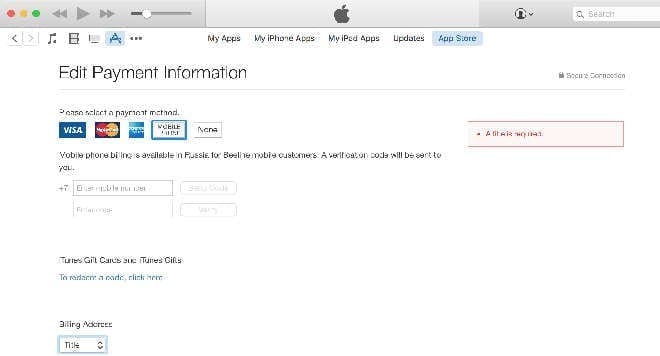 Apple carrier billing options have now begun to roll out in emerging markets starting with Russia as the first such market to be targeted by the Cupertino-based tech company. According to TechCrunch on Thursday, Beeline which is a mobile carrier based in Russia, now offers its users the ability to pay via iTunes through their billing system.

Carrier billing along with existing payment methods accepted by the App Store, iTunes Store and iBooks Store was introduced to allow customers to make app and media purchases along with Apple Music subscriptions which would be charged to their monthly phone bill or would be deducted from their prepaid amount. Boku, which is a start-up based in the United States of America is reportedly providing the technology for the carrier billing as Apple’s partner.

Additionally, according to the article “TechCrunch has confirmed that Boku is also the company working on the billing integration with O2 in Germany that debut last month”.

In order to set up a carrier billing option, one needs to verify a mobile phone number with a confirmation code via iTunes. If the number is connected to a postpaid wireless service then all the iTunes purchases, and other purchases will be directly charged to the phone bill. For those customers who are using a prepaid wireless service, the amount of the purchases will be deducted from their phone bills.

Beeline and Russia are good firsts for Apple, Beeline is owned by the company VimpelCom whose headquarters are based in Amsterdam and the company also owns carriers across other possible emerging markets including Ukraine, Kazakhstan, Uzbekistan, Tajikistan, Armenia, Georgia, Kyrgyzstan, Cambodia, Laos, Algeria, Bangladesh, Pakistan, Burundi, Zimbabwe, Central African Republic.

Apple’s partnership with VimpelCom is a very exciting thing and indeed it may open additional avenues for the company in many new emerging markets.

Russia, which has a population of 144 million, is thought to be one of the biggest internet markets of Europe and as smartphones are more prevalent in the country it is a big target for mobile commerce and mobile payments. Russia is the perfect place for Apple to grow and gain it’s foothold in new markets.