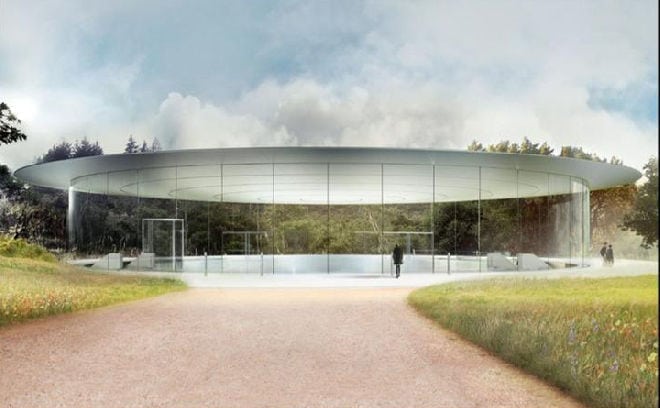 Apple started construction of the Apple Campus 2 some 3 years ago and it seems that the project is right on track. Steve Jobs announced the project back in 2006. Campus 2 will accommodate around 12,000 Apple employees on its completion early next year. Apple Campus 2 is located only a mile east of the current Apple Headquarters in California.

The new Campus has been dubbed as the “Spaceship”. This is due to the circular shape of the main building. Apple will be holding all future events in the new Apple Theater. Tim Cook reassured Apple fans in the March 2016 “Let’s Loop you in” event that Apple Campus 2 will be completed well in time for the 2017 deadline floated by the company.

We now have two new drone flyover videos that give us updates on the construction. Mathew Roberts produced an aerial video using a DJI Phantom Professional Drone.

The video shows that solar panel installation has gone up on the Apple spaceship. Fuel cells and generation installation is also well underway on site. Pavement is also going down in the parking garages and ramps. Progress has also been made on the R&D facility as well.

In the second video we get another perspective of the progress.  Duncan Sinfield shot this video.

He used a DJI Inspire 1 Pro Drone. Some landscaping has also been started on site. Preparations for a pond and the gardens can also be seen in the video. The pond and the garden will be located in the courtyard A few trees have also been planted on the surrounding site.

Apple’s new campus is set on a176-acree site and is a mile around. 300,000 square feet will be dedicated to research facilities and underground parking. A large area of the building has also been dedicated to a restaurant that will open up to the landscape.

I am sure that everyone at Apple can’t wait to move in.