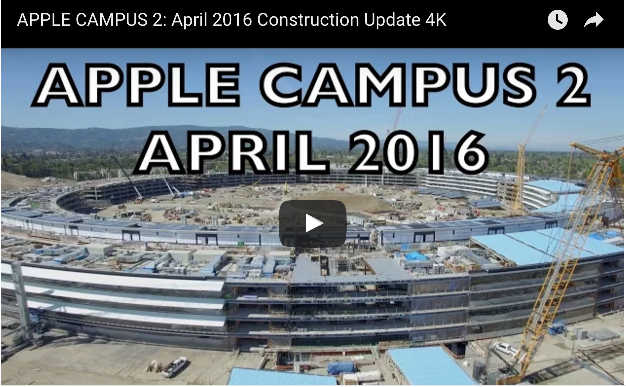 Two drone flyover videos of Apple Campus 2 have appeared. The first one has been filmed by Mathew Roberts and it is recorded using the Phantom 3 Professional drone by DJI with background music by Jason Edward & X-Change Ft. Dana Doom. The video gives us the updates to the construction as well as close ups of the research and development site which is located separately from the ‘Spaceship’. The video is also in HD and it shows how much progress has been made on the structure which was last seen a month ago via video captured using a drone. The video also states, in subtitles, that the Apple Campus 2 will have the ‘largest’ curved glass pieces in the world and will be constructed over 176 Acres of real estate. We also see that the cranes on the site are in almost constant motion.

Mr. Duncan Sinfield, who provided us with last month’s video, also showed us the monthly progress being made on the Apple Campus 2 in his video. The video opens with the announcement made by Tim Cook  in March 21. 2016 which was the final Apple keynote held in the Town Hall.

The video shows amazing visuals of the new campus and theater on the new Apple Campus 2 at 10480 Ridgeview Ct, Cupertino, CA 95014. It seems that the building is now going to be able to finish quite earlier than the late 2016 and early 2017 date that was floated by Apple. We can see in the video that the solar, as well as the glass panels, are now almost in place. We can also see the windows on Apple’s underground auditorium, which has been called the “Theater”, are being installed right now. Work on this part of the Apple Campus is almost finished. Even the tunnels which are situated underground in order to allow access to the car parking facilities are in the final stage of completion.

Both the videos are in 4K resolution and show the amazing Apple Campus 2 which was Steve Job’s last project.