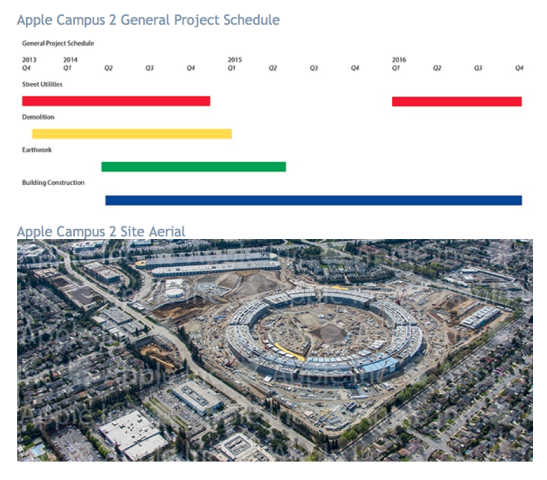 Duncan Sinfiel, videographer extraordinaire, has now provided us with aerial footage of the new Apple Campus and we must say, it looks amazing! We have all been watching the development of Apple Campus 2 very closely starting from the blueprints to the beginning of construction.

The video also captures, in detail, the progress on several of the major features of Apple Campus 2. This includes the ring-shaped office for the Apple employees as well as the underground auditorium, fitness center, garages, and solar panels. The whole project is valued at over $5 billion. The “Theater”, or the auditorium, is going to have almost a thousand seats and is encased by glass. This auditorium is the brainchild of U.K architect firm Foster+Partner.

The ‘spaceship’, or the ring-shaped office of the Apple Campus 2 is going to be America’s biggest corporate solar structure on its completion. It has been created by Premier Composite Technologies, which is a firm from Dubai.

The video was captured via a drone. Apple Campus 2 is supposed to house almost 12,000 employees. The construction of the campus is going to continue throughout 2016. Apple is using vendors as well as suppliers and designers hailing from over 19 countries to ensure that its ethos of innovation is complied with.

According to Mr. Tim Cook, if the construction remains to be on track, then the campus will be habitable by January of 2017. Mashable actually reported that the panels which surround the ‘spaceship’ are currently almost 33% complete!

Notice the best part of the video is a close-up of a building crane at 1:10! You can also see a little peek of Phase 2 of the Campus 2 project which is going to include the construction of a number of buildings which are aimed to give research and development space to the main structures. These structures will be focused along the North Tantau Avenue which is the eastern Boundary of the site.

Note: The video has been posted here with the permission of Duncan Sinfiel.