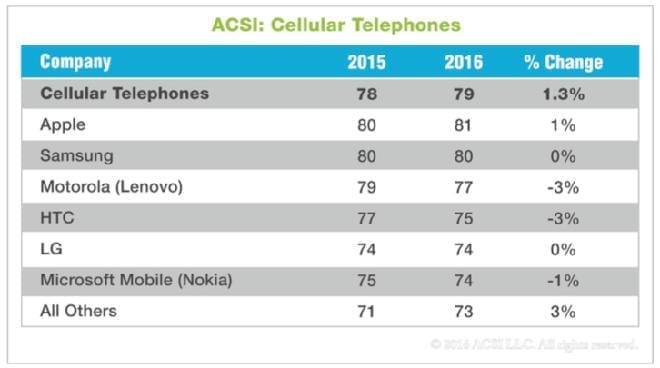 According to the latest American Customer, Satisfaction Index Report for 2016 published this Wednesday. They rank customer satisfaction with a score out of 100. Last year both Samsung and Apple tied for 1st place by scoring 80/100 each. But this year the Cupertino-based company managed to beat their South Korean rivals, Samsung, by scoring 81/100 while the latter maintained the same score as last year.

“Apple moves up 1% to take sole possession of the industry lead at 81, just ahead of Samsung, unchanged at 80. Lenovo’s Motorola recedes 3% to 77, as does HTC (75), while LG remains at 74. Microsoft Mobile, with both Nokia- and MS-branded phones, dips to 74, followed by the smaller manufacturers, which edge up 3% to a combined score of 73.”

In ranking their phones favorably, most customers said it was easy to text and make phone calls. They also liked their phone’s design and features and found the software and menus easy to navigate. The one sore point was battery life. Though it’s improved somewhat over time due to larger batteries and software enhancements, smart-phone battery life scored dead last in customer satisfaction.

Apple prides itself on achieving impressive customer satisfaction scores every year, and until recently, none of its rivals came close. But Samsung has been catching up in recent years, and with iPhone demand falling, it looked like the company may overtake. And yet, the average grade for Smartphone vendors continues to rise. This year, the average reached 79 points — it’s highest to date — up from 78 the past two years, 76 in 2013, and 74 in 2012.

As far as specific models are concerned, Samsung basically levels the playing field by having Galaxy Note 5 nose out iPhone 6 Plus, 86 to 85. Samsung’s S6 Edge+ takes the bronze medal,  Note 4 follows in fourth, whereas iPhone 6s, Galaxy S6 Active, iPhone 6 Plus, Galaxy S6 Edge, Motorola Moto G, and Galaxy S6 are the rest of the top ten placers.