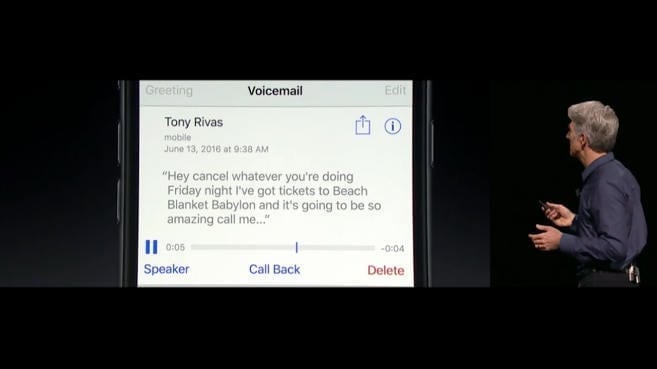 According to a report by Business Insider from August last year, Apple was testing a new service that used Siri to transcribe voicemail. This would not have made Apple the first company to provide this service as Google has already been providing the service for a couple of years, but they still have not been able to eliminate the errors while transcribing. This gives Apple the perfect opportunity to get ahead in the race if they manage to come up with an accurate method to transcribe voicemails.

Surely, as the report suggested, it was announced at the World Wide Developers Conference this year that Apple would be adding voicemail transcription in the latest operating system. It appears that Apple has finally come to terms with the fact that most people don’t like listening to voicemails anymore. So in iOS 10 your iPhone will convert speech into text so that you can quickly read voicemails instead of having to listen to them. For those who do like listening to voicemails, you will still be able to do so.

The idea that one could leave someone a normal-sounding voicemail and have it adequately transcribed is something that will attract a lot of users.  Siri is notorious for making some pretty big mistakes at times, but Siri was mentioned everywhere in the WWDC conference but it never came up while discussing this particular update so it is very much possible that Apple developers have come up with a new method of transcribing voicemails much more efficiently.

Along with voicemail transcription, Apple will be including phone spam detection, which will label incoming calls as spam when appropriate. It also introduces a new VoIP API that makes incoming internet calls look just like regular phone calls.