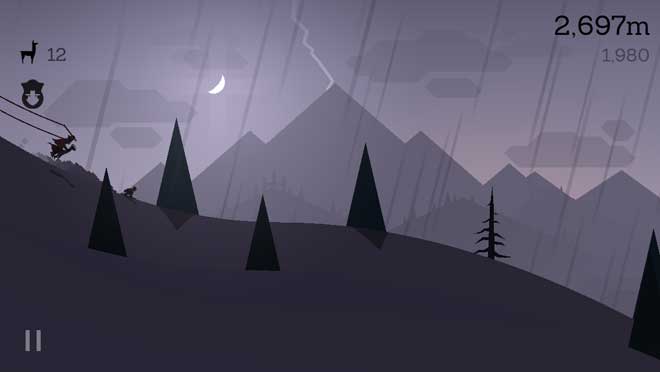 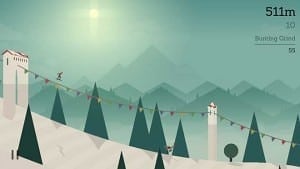 As I’ve mentioned before, I’m not much of a video game person. But sometimes there are games that are just too mesmerizing that they are impossible to hate. Alto’s Adventure is one of them. Voted as both “Best of February 2015” and “15 Most Beautiful Games” in the App Store, it is truly one of the most interesting and beautiful games I have ever seen.

In Alto’s Adventure, the main character, Alto, graciously snowboards down the beautiful mountains of his native wilderness. Through this wilderness, Alto encounters small villages, ancient ruins, and prehistoric woods. Alto snowboards across rooftops, grinds, and deep chasms. All of this while the ever-changing elements of the Earth run in the background. 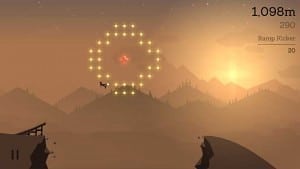 In the game, the player earns points the longer the distance traveled. Additional points are added based on the amount of tricks (backflips, jumps, grinds) the player does, the amount of runaway llamas the player catches, and the amount of coins that are collected. Some of the obstacles in the game include the weather, rocks, chasms, and the elders. The elders follow you on their majestic horses until they capture and stop you. One must run away from the elders through snowboarding tricks (makes you faster) until you reach a chasm where the elder is unable to continue any more on his horse.

The game also runs entirely on a one-button trick system and a series of challenges. Some of these challenges include jumping over chasms, escaping elders, surviving the night storm, and even capturing a certain amount of llamas. For every 3 challenges completed, the player gains a level, leading him/her closer to unlocking a new player. As for now, I have only unlocked Maya but there are still 4 more to be unlocked. As you play, Alto catches certain power-ups which include a Coin Magnet (attracts all coins in and out of range to Alto), a hover (allows Alto to hover over the mountain and certain obstacles), and the Wingsuit (makes Alto fly but this feature must be bought in the Workshop before it is unlocked). 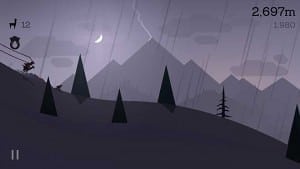 This is one of those games that is hard to put down.  Check it out and enjoy!