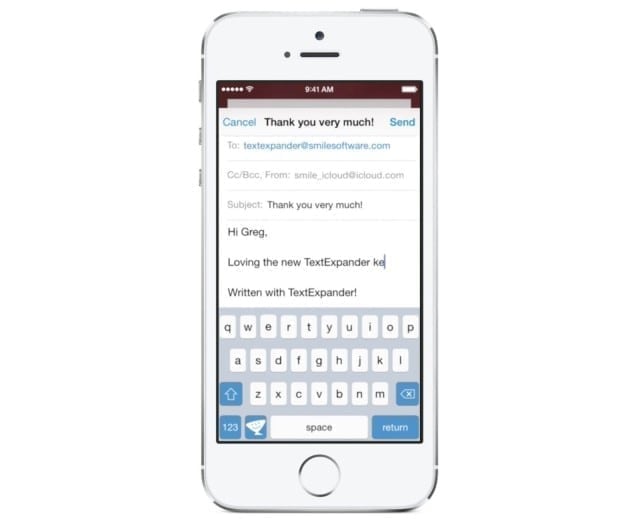 We have discussed several alternative keyboards for iOS 8 so far. There’s Minuum with its radically shape-shifting key design, and Ginger Keyboard for advanced editing, translation, and customization. Now we will be discussing TextExpander, which boosts text expansion for iOS 8.

But Text Expansion is built into iOS…

Since iOS 6, Apple has included system-wide text expansion in the form of ‘Keyboard Shortcuts’. You can manage them from Settings > General > Keyboard. We appreciate Apple for including text expansion into iOS long before other platforms, but the fact of the matter is that it is primitively basic. You just add a shortcut and expansion phrase (so that, say, @@ expands to your email address), and that is it. Agreed, this covers most text expansion cases, but they are hardly enough for seasoned text expansion enthusiasts.

Smile Software recently released a sneak preview of TextExpander for iOS 8. It is a fairly short video, lasting no more than twenty seconds, but it does give us a slight glimpse of how one of the most popular desktop text expansion tools will look like on iOS 8.

If TextExpander’s Mac OS X app is anything to go by, this will be a huge keyboard app. Insert custom email signatures, fill forms, customize when to insert expansions, see statistics, use case-sensitive shortcuts, and more.

We just hope TextExpander’s primary keyboard is as good as other alternative keyboards. Swype and SwiftKey – arguably the most popular alternate keyboards – have yet to tease their iOS 8 work.

Other than my email address, and home address, I do not generally type repetitive bits of information. My email signature is saved within the email applications, and no two blog posts of mine have the exact same sentence in them. I don’t see myself using text expansion for iOS 8, but that’s just me!

Keep an eye on Smile Software’s Apps page for their text expansion keyobard app for iOS 8.