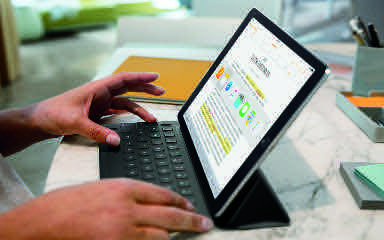 Even though the iPad Air lineup has remained un-updated for about two years this has now changed on March 21st when Apple unveiled a new iPad Pro that is 9.7″.

The newest addition to the iPad family will not be called the iPad Air 3 as previously expected. Indeed, as 9to5 Mac reported, Apple named this new tablet the iPad Pro 9.7 inch Model.

The new 9.7 inch iPad Pro is very similar in design to its 12.9-inch bigger brother which was released last year. The smaller version is going to be just a little bit thicker than the iPad Air 2 according to schematics leaked earlier in 2016.

Other changes in the design will include a pro audio four-speaker system located on the edges of the new iPad Pro.

The resolution on the display of the new iPad Pro is a phenomenal 3112 x 2334! Other rumors that turned out to be true are that the new iPad is going to also be brighter because of new pixel technology and it is also has a better refresh rate and will have a brand new A9X chip with extra RAM like the older iPad Pro.

The new iPad Pro has the best camera yet with an almost 12MP camera sensor which will support 4K video as well as 240 FPS slo-mo. It also has a 5MP Facetime camera and a rear flash and accomedates a Smart Connector.

The new iPad Pro is going to be the smallest tablet ever by Apple to support the Smart Keyboard as well as Apple Pencil.

The iPad Pro has storage starting at 32 GB and also offers additional options for 128 GB model and a 256 GB model. The iPad Pro is also available in space grey, gold, rose gold and silver.