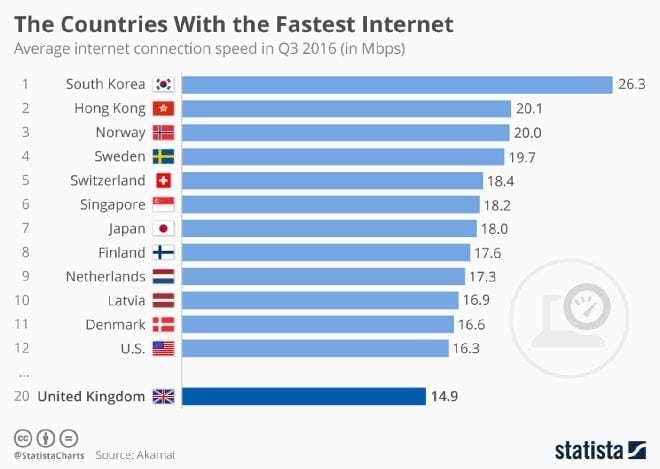 Something that has been in the back of my mind and has bothered me for years.  I’m talking about Internet speed and cost in the US compared to other countries.

I think it is safe to say that the US along with the UK and France are largely responsible for the development of the internet. Specifically, the early development of packet networking and the ARPANET laid the groundwork for the worldwide web.

Wikipedia reports “The US Department of Defense awarded contracts as early as the 1960s for packet network systems, including the development of the ARPANET”. ‘In the 1980s, research at CERN in Switzerland by British computer scientist Tim Berners-Lee resulted in the World Wide Web, linking hypertext documents into an information system, accessible from any node on the network.”

Because of this, I find it both ironic and infuriating that two of the countries that were heavily involved in the early development of this incredible resource and technology should be low on this list of countries that offer their populations- affordable fast Internet connections.  Why do we pay more for less here in the US? It’s just wrong or is it simply economics?

Tim Wu, a professor at Columbia Law School was an adviser to the FTC (Federal Trade Commission) and said. “The average market has one or two serious Internet providers, and they set their prices at monopoly or duopoly pricing.”

In the US it appears that we have one maybe two major players in each region so we end up with higher pricing for less bandwidth. We basically get less for more.  Other countries encourage competition in this space. South Korea, for example, subsidizes companies in order to keep bandwidth high and wide while keeping prices down. This results in an affordable fast Internet for their citizens.

So here we are in the 21st century where most US households only have one or in some cases two choices for relatively high bandwidth.  This is an essential infrastructure for our modern economy. There are billions of dollars in transactions generated on the Internet either directly or indirectly. Many people work from home or run a business that involves the Internet. Many receive education through the Internet or made the choice to cut the cable cord and receive all of their entertainment via the web. We subscribe and shop on the Internet. We receive medical care through telemedicine, an important and rapidly growing industry. The Internet of Things is yet another emerging market that relies on connectivity and bandwidth.  Affordable fast Internet allows for real growth in the technology sector.

By comparison, Seoul, Hong Kong, and Paris offer speeds that are much faster than US cities for plans that are priced between $35 and $50 a month.  I’m feeling cheated by the nearly $80 per month my connection costs. After all, I work online, my daughter receives about 30-40% of her education online.  We communicate and play online. For many of us, the Internet is a necessity, not a luxury.

It’s time for US policymakers and the FCC to realize the importance of this particular piece of infrastructure. Super fast fiber networks need to be the norm everywhere in the US. I hope the new US Administration takes a serious look at this and improve the infrastructure, eliminate regional monopolies, improve connectivity in all schools and medical facilities across America. Legislation that allows for a more level playing field that encourages competition and allows smaller providers to compete is needed. All of which should bring rates in line with other developed countries. Bandwidth and pricing need to finally be on par with most European and Asian countries. It’s embarrassing being near the bottom of the list in the chart above.

A town in Westminster, MD is taking on the infrastructure problem for all the right reasons. Check out this video. It’s encouraging.