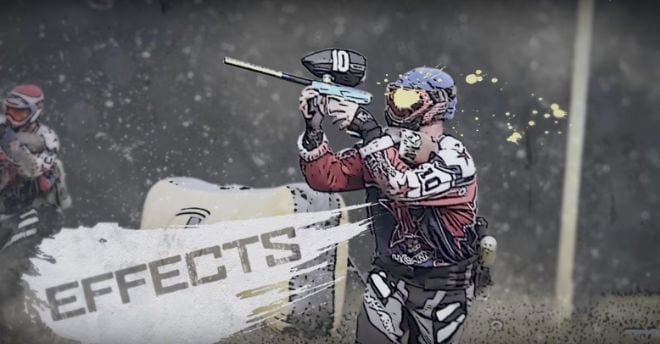 The game is officially licensed by 20 of the top paintball organizations and equipment manufacturers. It features the actual tournament layouts used in league competitions.

There are ten million paintball participants worldwide. XFP3 gives them a new kind of competitive challenge and a chance to “play like the pros”.

Coordinate with your teammates, and improve your marksmanship to win matches.  Team dynamics, strategy, and tactics, and individual skills determine a winning outcome. The physics of the game reproduces the parabolic arcs of paintballs. This is an entirely different physics model from most shooter games. Paintballs curve as they move toward the target. As a tactic this allows players to rain down shots on targets even if behind total cover.

Using tactics to cover the map will allow your team to dominate key routes and execute cross-fire attacks. Active movement and swift decision making are also a component of the game.

Philippe Constant, President of XField Paintball Studio said, “For the first time outside of official league tournaments, paintball fans can enjoy the authentic experience of battling to lead their team to victory on the same arena maps played by the pros. XField Paintball 3 presents PC gamers with an exciting new type of multiplayer FPS competition with unique parabolic paintball physics that change the way cover works in the context of dynamic team strategy and fast-paced matches that reward teamwork as much as shooting skill.”

In extreme sports worldwide, paintball is in third place with over ten million players participating each year. Six major leagues worldwide include NXL in the US and Millennium in Europe, and all six are exclusively licensed in the game.

Founded in Toulouse, France in 2012, XField Paintball Studio is the world’s leading creator of authentic paintball games.  The previous version of the game has been downloaded over 6 million times.

Check out this pulse-pounding video. It makes me want to suit up and get in on the action.