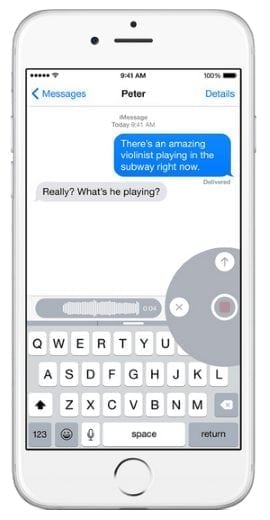 Taking inspiration from popular ephemeral messaging app ‘Snapchat’, Apple has included self-destructing messages in iOS 8. By default, these messages automatically get deleted from the recipient’s device two minutes after viewing. You can change expiry / auto-delete time by following our short guide after the jump.

Pressing and holding the camera icon in iOS 8’s messaging app allows you to quickly send self-destructing photo messages to your friends who are using iMessage. The same goes for the mic icon and self-destructing audio messages. By default, both expire two minutes after viewing – a lot more than the usual Snapchat.

I don’t see myself using these features on my iPhone 6. iMessage is simply not a replacement for Snapchat, or WhatsApp, because it is strictly limited to Apple devices. Snapchat and WhatsApp work on a number of platforms, so I don’t have to think, “Does XYZ have an iPhone?” before sending any kind of message; for quick communication, that is hugely important.

Apple strongly believes its network of 500 million plus iOS and OS X devices covers enough people to make iMessages useful. That’s what BlackBerry thought once, too, and we know how that went. Hopefully Apple will one day open up their web services to more platforms for greater use.

How To Change Expiry Time For Self Destructing Messages iOS 8 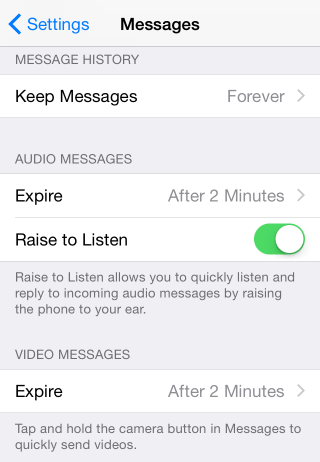 It is actually fairly simple. Just go to Settings > Messages. You will see “Expire” options under Audio Messages and Video Messages. Tap on “Expire” to make your selection.

It isn’t as easy to change expiry time in iOS 8′ Messages app, as it is in Snapchat. Messages.app isn’t meant for ephemeral messaging anyway, so if you find yourself regularly changing expiry times for self destructing messages, consider switching to Snapchat.

On a sidenote, I’d like to point out another useful little Messages feature in iOS 8: you can auto-delete old messages. At this point, my Messages backup is over 400MB. The ability to schedule deletion of messages sent X days, weeks, or months ago is brilliant.