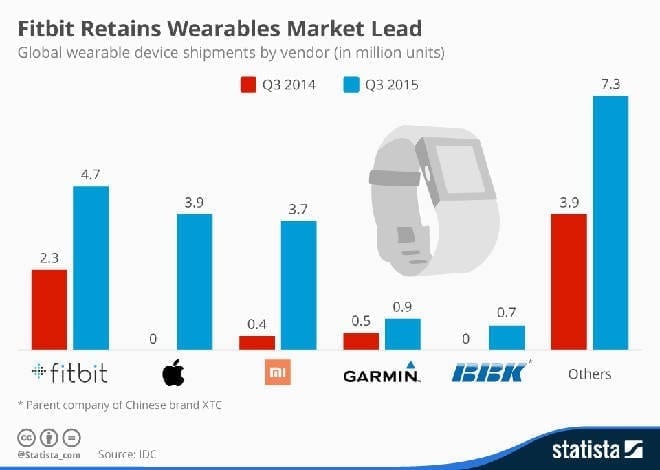 Since I’ve been focused on wearables lately I thought I’d pass on this piece of information from our friends at Statista. Statista is reporting that despite strong competition from Apple and Xiaomi, Fitbit has retained the lead in the global wearables market in the third quarter of 2015. For those who are not aware, Fitbit is the leading fitness tracking device in the world. They shipped 4.7 million units between July and September.  That is a 100% increase over the same period last year.

The company uses a smart strategy to gain market share by marketing their device directly to large corporations with the goal being to incorporate the device into a company’s wellness health initiatives and it has been paying off. Unlike the Apple Watch, Fitbit’s entire focus is on fitness.

A quarter after the Apple Watch became available, Apple sold 3.9 million watches, which represents an increase from the 3.6 million units it shipped in its first quarter after it’s release. Xiaomi came close to matching Apple’s volume, with a device that costs a fraction of the Apple Watch. Xiaomi’s low-cost Mi Band is very popular in China.

Statista reports that “Overall, the wearables market almost tripled in size compared to last year’s third quarter. Between July and September, 21 million wearable devices were shipped around the world according to IDC’s estimates”.  This was similar to the information I received at the WearbleUSA Technology show that I just attended.  There is a lot of activity in this sector. Health and Fitness tracking through wearables are likely to be the next big thing in the Internet of Things.

Fitbit continues to resonate well with those customers who are only interested in a fitness tracker. With sleep tracking included in Fitbit, you will need an app for that on the Apple Watch.