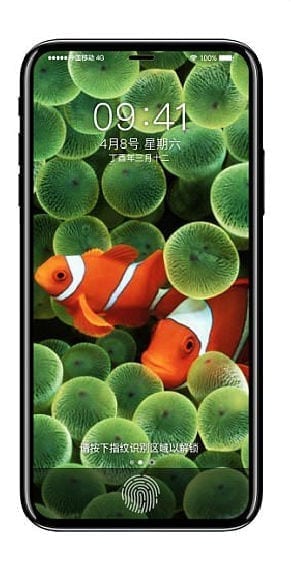 The much-anticipated iPhone 8 is expected to have an edge to edge, nearly bezel-less display.  It will certainly have many more appealing features. The one feature that has gotten a lot of press is the one feature that might not make it into the iPhone 8. That would be the embedded sensor under the screen to facilitate fingerprint scanning or Touch ID.  Apparently, there are unresolved issues integrating the fingerprint sensor under the display.  If this issue cannot be resolved in the next month or so Apple may have few options.

They can scrap the embedded sensor approach altogether. Or they can delay the launch of the flagship iPhone and release the other two models first.  It is highly unlikely that Apple would scrap an important security feature like Touch ID.  Even with retinal and face scanning, fingerprint scanning is an important rung in the security ladder and plays an import role with Apple Pay.  Retinal and face scanning has been thought to be more of a supplement to Touch ID fingerprint scanning.

If the problem can’t be resolved, we may see Apple move the fingerprint scanner to the back of the iPhone.  Another option is to have 3D sensing replace fingerprints.  3D sensing production appears to be on track and could serve as an alternative to fingerprints.

Back in February, KGI Securities analyst Ming-Chi Kuo said; “the iPhone 8 will feature a revolutionary front-facing camera system with infrared for fully-featured 3D sensing capabilities. The advancements will enable the camera to determine the location and depth of objects placed in front of it.”

This new 3D sensing feature can be used for both retinal and face scanning.  I would imagine objects could be 3D scanned as well. This should open the iPhone 8 up to some interesting creative possibilities.  Whatever Apple decides it is likely the iPhone 8 will not disappoint. We will have to wait and see how this pans out.