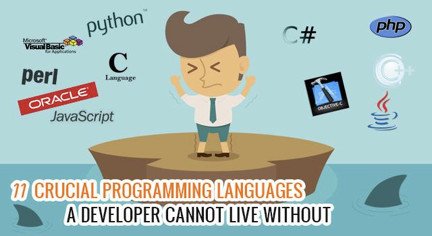 When a developer is working he is always surrounded by uncountable codes in his/her mind. Whether you are an iPhone app developer, an Android developer or you code for designing websites, you need to be very careful while working with these codes. Your single mistake can take you into a number of loops to find out where you are actually lacking. In this post, we are discussing various programming languages that developers have to learn before they start designing their work.

Let Us Have a Look at Various App Development Languages:

If you are working on web-based applications and you want to add interactive features, JavaScript is the language that you need to work with. This language offers you one of the best features i.e. cross-browser compatibility. Professionals who work on these C syntaxes find it very easy to learn JavaScript. It is mainly used by Android developers for designing their mobile applications.

This language is known as the best for developing any type of iOS application. Objective C provides coders with a similar ecosystem that iOS application development companies offer. And this makes the creation of native functions very easy. This language also comes in handy for designing the applications that will run properly on various devices, for example, iPod Touch or iPad. On the other side of the game, Objective C seems to be a tough game for beginners. The major issue concerned with it is its unavailability on some operating systems.

This language is especially for web programmers and with the help of PHP, you can create responsive and dynamic websites. This is considered one of the simplest server-side programming languages. Everything that a developer needs to do is to frame their codes into HTML files. This PHP language is an open-source language and allows you to tweak the modules and code the lines according to the requirements.

C++ is an updated version of the C language and is now enjoying widespread popularity mainly because of the variety of functions that allow coders to perform well on this platform. Starting from the apps and software system frameworks to the new games, you can use C++ for almost every programming need. You can create both clients as well as server-side applications that you can create with an intermediate level of coding. The object-oriented structure of this language will offer you extra reliability and debugging options.

This is the new programming language released by Apple especially for designing mobile applications to be operated on Apple’s iOS devices. It offers a lot of new features to their users like improved speed, and cool previews. Contrary to what many have believed in the beginning, Swift will not be used as a substitute for Objective C. These two are especially meant to be used in collaboration with each other. You can use the Swift language seamlessly with Cocoa and Cocoa Touch. Every iOS app developer needs to learn this language if they have not done this already.

One more relatively important language that is useful for making both mobile applications, as well as web applications, is Python. Python is mainly used within the web applications of Pinterest and Rdio and is also being used by the executives of Google and NASA too. The best feature that Python has is its minimal and compact nature. It makes sure that people only have to write only two to three lines of code for a specific function. Python offers its users high end readability.

Sometimes programmers and application developers’ needs to prepare their reports from the text file input. For this purpose developers choose Perl as their language. This language is not a compiled language and it is comparatively speedier than C. Systems programmers in Perl are ideally very fluent. The programs that use this language are called Perl Scripts.

This language was developed in the 90s by Sun Microsystems. Java is especially popular for designing Android apps, software for enterprises, and other web applications. The main point is that Java can be very easily transported from Windows to Mac systems and is contributing a lot to designing and developing good quality applications. Java is an object-oriented language and it handles its data efficiently. For new coders, it is advised to start learning Java along with the C-based language because both share various common features.

Ruby is used by a number of app developers for designing interactive and dynamic smartphone applications and for developing high-speed websites. It is completely object-oriented and is not at all complicated. This language mainly supports Ruby for Rails. Also, you can use Ruby when you are short of time.

If you want to develop mobile applications for Windows phone then you need to work with this language. You need to be an expert in C#. It is based on other C languages and it won’t take much time to learn. You will also find certain similarities with Java and this will make it simpler for new programmers. For any type of .NET based coding, C# is considered as the best programming language.

Mobile app developers are very much familiar with SQL that stands for Structured Query Language for framing their RDBMS in an efficient manner. SQL is known to be one of the oldest programming methods for queries. This language is particularly useful for managing informational databases.

These 11 developing languages serve as the application development tools for developers and are very important in the life of a developer be it an Android developer or an iPhone developer. Learn these and work with these languages and design your applications the best way you can.